﻿
Both of these biomolecule groups consist of amino acid chains, with the only difference being length: peptides comprise anywhere from two (dipeptides) to about 50 (polypeptides) amino acid residues, while proteins are polypeptides that extend beyond that size.

Peptides are produced by all living things and assume a wide range of identities and functions depending on their amino acid composition, including: 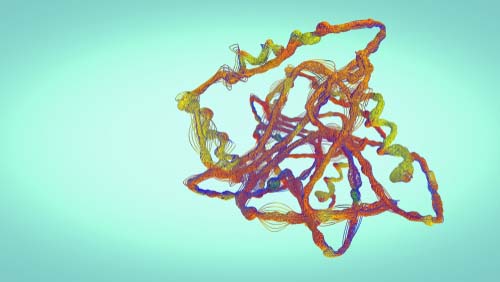 In addition to the many other roles peptides play within these systems, they've been identified as agents of intercellular communication. These short, secreted peptides are taken up through the membranes of receiving cells where they convey information about the physiochemical states of their origin cells. Many such signal peptides can exist in the same organism; in the fully sequenced genome of the flowering plant Arabidopsis thaliana, for example, over 1000 potential signal peptides have been identified, most of them not yet characterized.

Proteins are polypeptides long and complex enough to form folded three-dimensional structures and perform more sophisticated functions than shorter peptides. Together with carbohydrates, lipids and nucleic acids, proteins are designated as macromolecular biomolecules — substances essential to one or more fundamental biological processes.

Like their smaller peptide counterparts, proteins perform a vast array of functions that depend on their amino acid sequence and structure. Understanding how proteins are structured is essential to understanding how they can perform such a variety of tasks, from forming the flagella used by swimming bacteria to regulating blood sugar levels in mammals.

Because the chemical and physical properties of proteins vary, they can be isolated from one another for subsequent analysis by several commonly used methods: