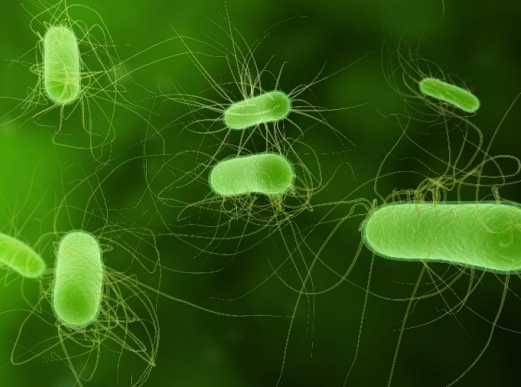 Following the recent dynamic advances in recombinant DNA technology, the expression of heterologous genes in diverse hosts allows the industrial bioproduction of a wide range of recombinant proteins. One of the most critical choices in bioprocess design is the selection of a suitable host relying on: 1. upstream cultivation efficiency, 2. easy genetic manipulation and availability of molecular tools, 3. ability of posttranslational modifications e.g. glycosylation, and 4. protein secretion capacity for downstream processing and utilization as biopharmaceutical ingredients, among other applications. Several organisms are currently used for recombinant protein production, most particularly Escherichia coli, by far the industry’s favorite workhorse. Easily genetically modifiable, E. coli has the advantage to grow rapidly on versatile substrates such as yeast hydrolysates and to yield high protein titers. 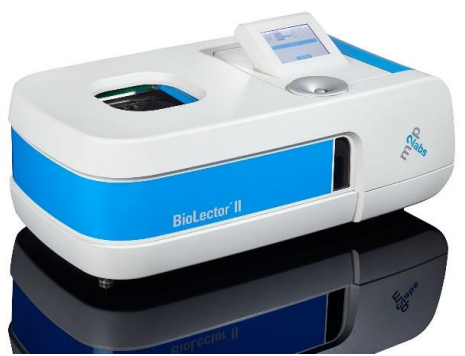 During the course of a typical bioprocess optimization it is common to conduct preliminary experiments with the aim to discover which media composition, especially nitrogen-based nutrients, are the most suitable for the host strain and efficient production of the recombinant protein of interest. For such applications, a high throughput screening platform is the tool of choice to maximize speed and accuracy of experimental parameters. The BioLector® platform offers scalable, high throughput analysis with online measurement of crucial cultivation parameters. 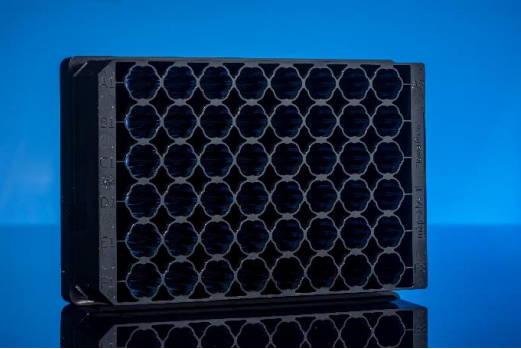 The BioLector® system utilizes a standard microtiter plate (MTP) format and operates with non-invasive optical sensors. It is ideally suited for aerobic cultures with high cell density due to the continuous shaking during optical measurements. Parameters such as pH, dissolved oxygen (DO), biomass measurement (via scattered light signal) and several fluorescences can be monitored. This allows live, multifaceted tracking of experimental conditions, especially useful for evaluating fluorescently tagged recombinant protein production. 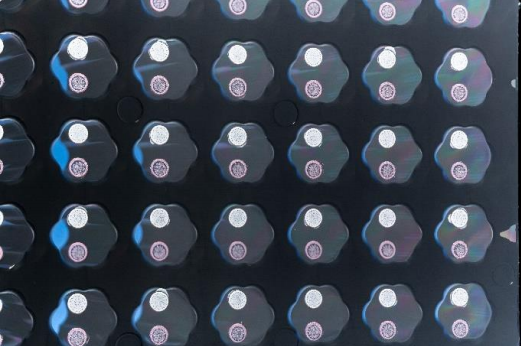 Figure 4: Bottom of the MTP, displaying measurement sensors for pH (white) and DO (red)

Furthermore, live experimental data supports calculation of the space-time yield at any time point, superior fermentation details vs. a single end-point measurement. The system can be enhanced with the integration into a RoboLector® liquid handler. The RoboLector® has the ability to make sample extractions from each fermentation well during the experiment, conduct feeding or induction dosing procedures, all of which can be triggered manually, or by any measurable signal from the BioLector®. Thus, a dynamic process can be run completely autonomously after experimental initiation.

Several yeast-based nutrients from Procelys were evaluated and compared relative to biomass yield and recombinant protein formation. With the RoboLector® platform only a few experiments are necessary to screen for the best media for protein production and induction time.

Cultivation media: Several TB-like (Terrific Broth) media were compared with a standard TB media (Carl Roth). TB media was prepared as follows: 5 g/L Glycerol, 12 g/L Tryptone, 24 g/L Yeast extract, 12,54 g/L K2HPO4, 2,31 g/L KH2PO4. The media was adjusted to pH 7.2 and autoclaved. Glycerol was added after autoclaving. Procelys yeast peptone was used for all media batches as a substitute of tryptone (except the already prepared standard TB from Carl Roth). Different yeast extracts were used for the diverse batches of media. All yeast-based sources, the yeast extracts and yeast peptones were provided by Procelys, a global key player in yeast-based fermentation nutrients business (Maisons-Alfort, France). In the current series of experiment, the TB-like media is named according to the Yeast extract used, which were the following: ProCel® 1, ProCel® 2, ProCel® 3, ProCel® 4, ProCel® 5 and ProCel® 6. Media which showed turbidity after autoclaving were left to sediment. After sedimentation the clear supernatant was removed by decanting and used for cultivation.

Cultivation conditions in the BioLector® II: Prior to main culture inoculation in the microtiter plate, a preculture was cultivated in a shake flask. 20 mL of the standard TB media was inoculated with a cryogenic culture of E. coli BL21(DE3) pET-28a(+) EcFbFP in a 250 mL shake flask. The culture was incubated at 37°C for 6 hours. From this preculture, the main culture was inoculated. A 48- well FlowerPlate® (MTP-BOH2) was used for cultivation in the BioLector®. The plate was shaken at 1400 rpm at 37 °C. Each cultivation well was filled with 800 µL of culture broth for non-induced experiments and 790 µL for experiments with induction. 10 µL of 50 µM IPTG was added at the induction time point for induced experiments. The O2-Up module of the BioLector® was used to enrich the headspace atmosphere in the incubation chamber with 35 % oxygen to avoid oxygen limitation of the culture.

Biomass calibration: Prior to experimental set up, a biomass calibration was created, where the scattered light signal at 620 nm was correlated with the optical density at 600 nm. To acquire these data, a culture was initiated in a shake flask using the same conditions previously described. The initial shake flask was harvested after 5 hours when the cells were in the exponential growth phase. The cells were subsequently centrifuged, washed and resuspended in PBS. The resulting solution was diluted at different cell densities (see figure 5) and the OD600 was measured with a photometer. These dilutions were filled in triplicates into a 48 well FlowerPlate® and biomass measured at the same operating conditions as described above. With the scattered light data acquired during this experiment and the previously measured optical densities, a calibration graph was created (figure 5). 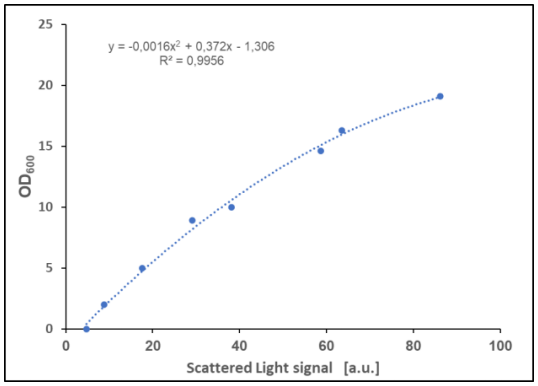 A polynomic correlation was established, which converted the scattered light signal directly into the optical density. 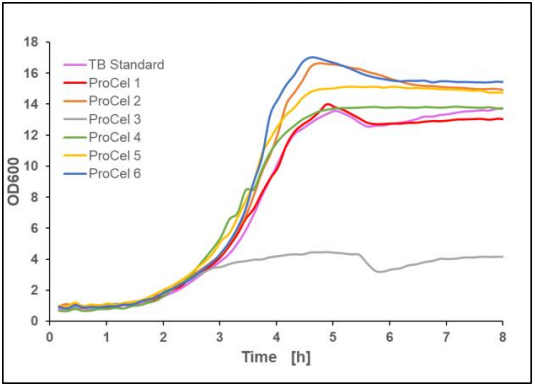 Figure 7 shows the corresponding dissolved oxygen (DO) values of the process. Cultures grown on media containing ProCel® 3 and ProCel® 4 failed to reach 0 % oxygen saturation suggesting a low metabolic activity of the strain in that media due to limited oxygen consumption. Conversely, the remaining cultures, in addition with the reference TB standard, reached 0 % oxygen saturation for a short duration, thus demonstrating high metabolic activity. 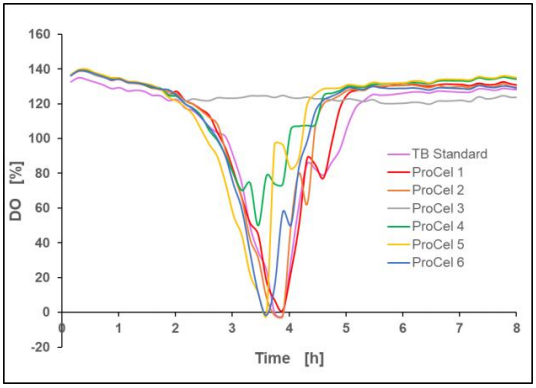 In addition to biomass production, induced product formation was evaluated. The E. coli strain BL21(DE3) pET-28a(+) EcFbFP produces a flavin-based fluorescent protein. The gene is derived from the N-terminal LOV domain of the Bacillus subtilis YTVA protein and has been codonoptimized for expression in E. coli. The advantage of such a system is that flavin-based fluorescent proteins do not rely on oxygen to mature, whereas GPF does. Therefore, fluorescence maturation is not impacted if the culture is shortly oxygen limited. The gene for the YTVA fluorescent protein was cloned into pET vector under the control of the strong bacteriophage T7 transcription and translation regulatory system. Expression of the  T7 polymerase was induced by the addition of the lactose analogue IPTG to the bacterial culture. Since a single experiment with a FlowerPlate® offers room for 48 independent cultures, different induction time points can be tested. Using the RoboLector® system the induction of the culture can be automated and proceeds without any further intervention.

A fixed time point for induction was chosen for a first evaluation. The control experiment without induction gives information about the culture’s growth status. With this information three induction points during or close to the exponential growth phase were chosen: 3, 3.75 and 4.5 hours after the culture start. Figure 8 shows the mean value of the measured fluorescence for every TBlike media and induction time combination. The fluorescence kinetics clearly indicate the different yeast-extracts and yeast peptones tested here yield variable EcFbFP levels.

Two samples showing the highest fluorescence signal were particularly remarkable: the culture grown on ProCel® 2 with an induction point at 3.75 hours and the one on ProCel® 5 with an induction point of 3 hours. After 7.7 hours of culture the GFP values reached 102.94 a.u. for ProCel® 5 and 101.82 a.u. for ProCel® 2. Near the end of the culture, Fluorescence values are still rising, albeit, at a slower rate. Since the highest EcFbFP producers were already apparent, the experiment was stopped. 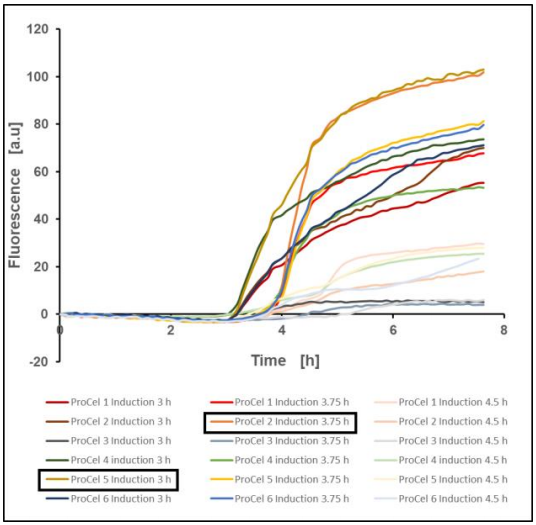 A setback in this approach is the missing comparability between the different samples concerning biomass effects on protein yield. After 3 hours of cultivation, some cultures have already grown to an OD of 6 whereas others only have reached an OD of 3. Cultures which have different optical densities when induction is done could allow for misinterpretations on the protein production performance of the experimental E.coli strain grown on each yeast-based nutrient.

With this insight, a new approach was followed where the induction point was coupled to the biomass signal. With the RoboLector® driven by signals from the BioLector®, induction dependent on the specific biomass value is feasible for each individual well. OD target values of either 3, 6 or 8 were set for the liquid handler to automatically add the IPTG to induce protein production based on the growth kinetics of the culture within the well (see Figure 9). Thus, biomass dependent protein production was evaluated. 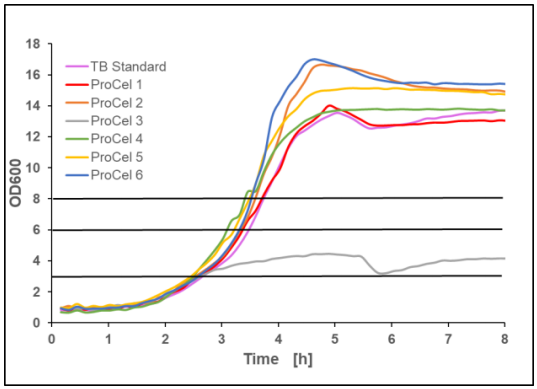 Figure 9: Representation of the individual induction points at certain values of the optical density. Induction takes place at OD 3, 6 and 8.

As shown in figure 10, the culture grown on ProCel® 2 performed best with a final value of 146.23 a.u. after 12.3 h, with the second highest value reached in the culture grown on ProCel® 5 with a value of 138.1 a.u. When comparing with the former set of experiments, the ranking in the current experiment is dissimilar with the experiment where induction took place at certain time point. This observation demonstrates the importance of the optimal process conditions and make them comparable. From the data presented here it was also clear that the fluorescence was higher when compared to the previous experiment. Indeed, as emphasized by many papers in the field, the time to induction is a key parameter. Similarly, inducer concentration must be evaluated during the optimization of recombinant protein production in E. coli. 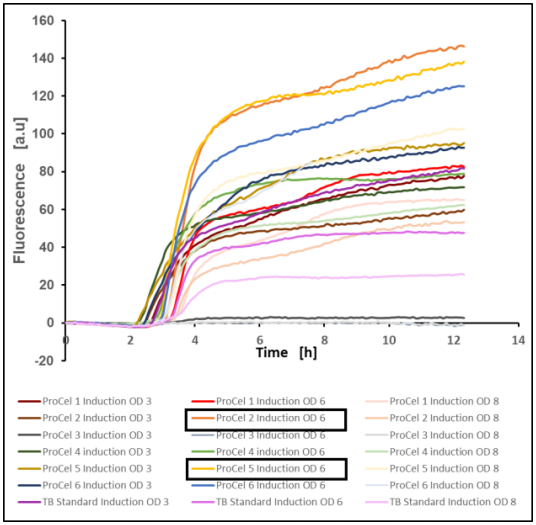 From Figure 10, the fluorescence values strongly suggest some of the individual yeast-based nitrogen sources tested here result in higher recombinant protein production in comparison with the reference TB media. These results highlight the importance of selecting the media components capable of achieving high and consistent yield for a specific bioprocess.

With the RoboLector® system m2p-labs provides a high throughput screening platform suitable for versatile applications. Its unique flower shaped microtiter plate allows for high oxygen input and the noninvasive sensors give the customer the opportunity to acquire several sorts of online parameters like in a lab bioreactor. As shown in this App-Note media screening can be conducted with minimal effort. With the integrated liquid handler even more opportunities are given. Feeding, pH regulation and - as shown in this application note - induction profiling can be implemented in small scale, giving the user the advantage of saving time and costs.

3 This strain was kindly provided by the group of bacterial Photobiotechnology by Dr. Drepper at Heinrich Heine University Düsseldorf.

2. Robert L. McKown “Development of Biotechnology Curriculum for the biomanufacturing industry”, The official journal of ISPE, 202, vol.22 No.3