You’ve labored at the bench and generated data that you’re about to meticulously analyze before preparing the results of your hypothesis-testing for presentation. In this post, we’ll discuss elements that factor into making beautiful (and consistent) displays of data. View our recent post on Analysis Consistency in Flow Cytometry for a discussion of broader themes relating to analysis consistency.

To summarize what will follow in short: make sure all of your data are on scale, accurately compensated, and make sure all your plots are well-labeled.

There are a number of plot types that can help you tell your story in different, visually pleasing ways when used appropriately. Among the flashier ways to display data are heatmaps, histograms, and histogram overlays. These one-dimensional representations owe their appeal largely to their ability to convey an easy-to-understand message: “This population changed in X amount in Y condition.” Where this gets tricky is if you’re trying to describe a heterogeneous population. When deciding on a plot type to use to convey your story, you’ll want to make sure you’re telling the whole story, and not omitting important information about the behavior of subsets in the course of eliminating a dimension of data display. In Cytobank, you can mouse over a heatmap square to display the underlying dot plot, which will reveal another dimension of information of your data.

After you’ve selected plot types and statistical measures, you’ll want to make sure your plots are well labeled in a consistent manner. Adequate labeling is essential to the interpretation of your data. Check that axes are labeled and tickmarks are present for all plots. Make sure that color scales are present for heatmaps and other color-coded representations. Cytobank Illustrations were designed to automatically build plot layouts that contain the necessary labeling components, and elements such as color scale values and the display of tickmark numbers can be customized through the “Plots: Scale Display” box on the left side of the Working Illustration page.

In this multiplexing era where multicolor fluorescence-based flow cytometry abounds, the application of a compensation matrix profoundly transforms a dataset. Verifying that data are not over- or under-compensated is another step in the process of making beautiful plots. Consider an example where you’ve stained whole blood with FITC-anti-CD3, PE-anti-CD4, and PE-Cy5-anti-CD8, and have also collected single stain controls. There is overlap among these emission spectra, and so compensation must be applied to discount overlapping signal. You’ll want to determine that the data are appropriately compensated, and not over- or under-compensated.

Perhaps one of the more important factors to consider when displaying flow cytometry data has to do with scale settings. Zooming in on an example using uniform beads to demonstrate the effects of proper scale settings, Figure 3 shows how to adjust the scale minimum and cofactor using a negative control. In this example, the default Cytobank scale settings were automatically applied to the experiment upon upload (Figure 3A), and the scale settings and cofactor were adjusted for proper data display (Figure 3C). We’ll walk through some background and how to correct the scale display values.

On a conceptual level, you know that you want all data to be visible in your plots (i.e., no truncation), and that the single cell distributions accurately reflect the presence or absence of populations. A good first step in this direction is to make sure you collect fluorescence data with biexponential scaling enabled in the data acquisition software (for digital machines), as this will allow you to collect data with values below zero. Generally, the collection software will automatically adjust the scale minimum such that all events are captured, and you can always manually adjust these settings.

Moving over to the analysis side, many analysis platforms have a set of standard scale settings that are applied to the visualization of your data, and these scale settings often need to be adjusted to ensure all your data are visible and distributions are properly calibrated. A great way to do this is to build an Illustration that shows channel data for negative controls for each channel (ideally with the compensation matrix you intend to use already applied). This is the same single stain control layout from the “Compensation” section above (Figure 2), and you can built it using single stain compensation bead controls that you probably already ran alongside your samples. You can set experiment scale settings based on these negative controls prior to proceeding with experiment analysis. The above figure shows such a scenario, where the compensation controls were used to adjust scale settings.

Returning to our example in Figure 3, the default scale settings applied to these data included a scale minimum of -200 and a cofactor of 150 (Figure 3A). We can see a spike in the leftmost bin and notice that generally the peak looks flat, indicating that many events are still off scale. So the first step is to lower the scale minimum to ensure all events are on screen (Panel 3B, scale minimum = -1000). Next, we see that signal peak still does not conform to a normal distribution, despite using uniform beads with no signal on this channel.

Here’s another example of the effects of scale settings on data display, following the same logic we just discussed. In this example, a 1:1 mixture of stained:unstained compensation beads:

Figure 4. The effects of scale minimum and cofactor on data display: Comparison of scale transformations of 1:1 mix of positive and negative compensation beads (Courtesy of J. Irish)
(Click for higher resolution image) 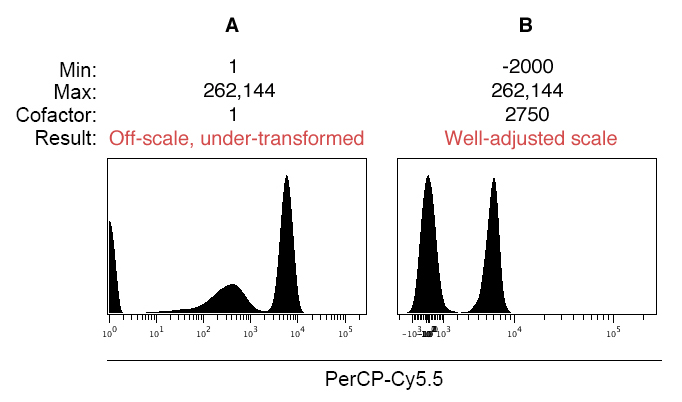 In Figure 5A, notice that there is a data spike on the low end of the scale near the Y axis, resulting in truncation of data and the creation of an artificial third population. In this scenario, the scale such must be adjusted such that it displays negative events, and using the arcsinh scale allows for configuration of the linear region around zero through adjustment of the cofactor.